A pleasant time to visit as the high temperatures of the last few months decline. The Pantanal enters its dry season towards the end of April. June is a delightful time to visit the Green Coast between Rio and Sao Paulo; evenings are cooler, but the air is fresh and the sea still warm. Bahia's rainy season is likely to begin in June, but it is usually easy enough to plan your day around the one or two showers that occur in the afternoon. 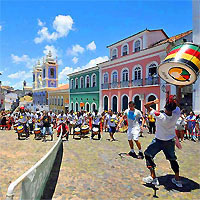