Welcome to Croatia! Upon arrival, you will go through customs and immigration. Should you opt to purchase a transfer to your hotel, a representative will be waiting for you as you exit immigration. Otherwise, make your way to Pula and arrive at your hotel. Check in and do not give in to jet lag! There is so much for you to see and do!

Begin your vacation to Pula by visiting its most famous landmark, Pula Arena. Constructed between 27 BCE and 68 CE, it is the largest and best-preserved of all the Roman amphitheatres left in Croatia, and perhaps the best-preserved of the Roman arenas left outside modern-day Italy and France. You will notice gaps in some parts of the façade; over the centuries some of the stones were repurposed for the houses nearby. It used to host gladiator battles, with a capacity of 20,000; now it hosts open-air festivals and movie nights.

Head toward the center of town. As you go toward the Kaštel, you will pass by the Church of St. Anthony of Padova, dating from the 17th century. In front of the Kaštel you will see the Twin Gates, one of the few remaining portions of the town wall system, from the second century CE. Walk through those and head toward the Kaštel, also called the Venetian Fortress. The fortress was built on the top of the hill overlooking the Old Roman City by architect Antoine de Ville in the 17th century. Not only is it a living museum, it is a physical museum as well, housing the Historical and Maritime Museum of Istria. Outside the Kaštel, back toward the Twin Gates, you will see an entryway into a series of underground tunnels called the Zerostrasse. They were dug during World War I as a way for residents to escape the first-ever air raids, and were used again during World War II. Portions of the tunnels are open to the public to explore.

South of Zerostrasse, still along the perimeter of the Kaštel, there are ruins of a Roman theatre adjacent to the Archaeological Museum of Istria and the Gate of Hercules. The Gate of Hercules is an unassuming archway, but dates from the 40s BCE when Pula was first founded. The Gate was discovered during an archaeological find in the 19th century and reconstructed as faithfully as possible. If you are looking for restaurant or café options for dinner, head south along Giardini ulica to Ulica Sergijevaca and turn right. You will pass through the Arch of the Sergii, a grand portal dating from 27 BCE, and there are many dining options along this street. Return to your accommodations at the end of the evening. 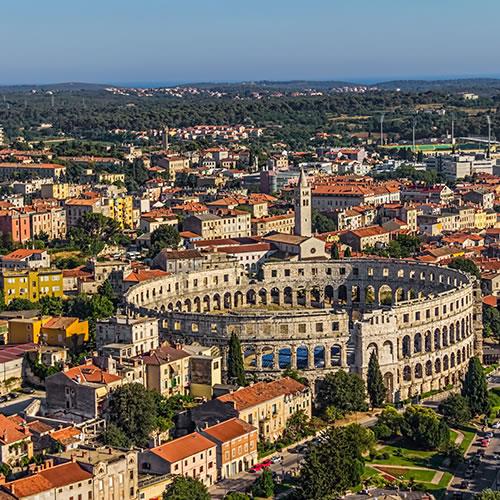 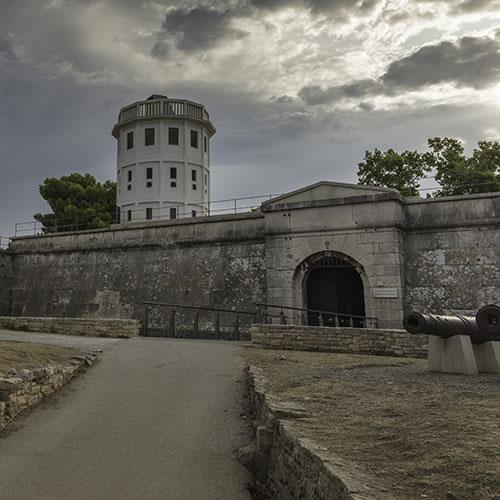 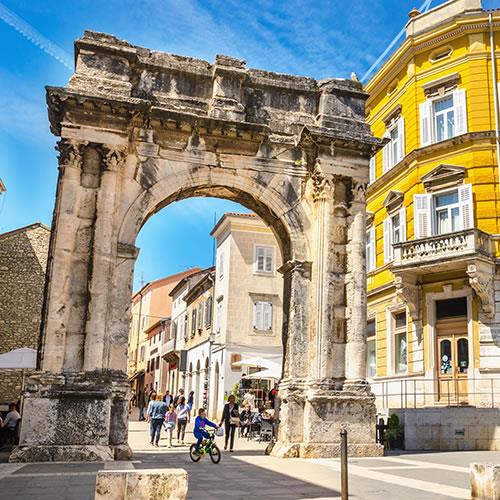 Begin the morning with a stroll along the waterfront (Riva), on the side where the ACI Marina Pula is located. View the ruins of St. Theodore`s Quarter, dating from the time of the Histrians (who lived in the area before the Romans), and were only excavated about fifteen years ago. About five hundred feet down the waterfront, you will see Pula Cathedral with its free-standing bell tower. The church itself dates from the fourth century CE, with various additions occurring throughout the centuries. (The bell tower dates from the early 18th century.)

Moving further along, you will notice a cluster of restaurants. Stop for breakfast before heading on down the waterfront to Forum Square and the Temple of Augustus. Finished in the year 14 CE, during Emperor Augustus`s reign, it is beautifully preserved, featuring columns that are nearly 50 feet high. It is one of just two complete and preserved Roman temples to be found outside of Italy. Next to the Temple, you will find the Venetian-era Pula Communal Palace, which is the current seat of city government. One of the older Venetian buildings in Pula is situated between Forum Square and Castropola ulica; the Monastery of St. Francis dates from 1285 and is worth exploring, in particular the Romanesque cloisters. As you head back toward the Arch of the Sergii, stop in at the Church of Santa Maria Formosa, where you can find a Roman-era floor tile mosaic depicting the punishment of Dirce, the wife of Lycus in Greek mythology, who was sentenced to death by the horns of a bull.

Afterwards, head south from town about two miles to the Verudela peninsula. A key component to the protection of Pula, it is home to two Austrian-era fortresses, Fort Bourguignon and Fort Verudella. Fort Verudella is also the site of Aquarium Pula, the largest aquarium in Croatia. On each side of Fort Verudella there are beaches: Hawaiian Beach on the western side and Histria Beach to the east. After touring the forts, give yourself a little beach time. There are a few dining options on the peninsula should you want to eat lunch or dinner. Return to the Old Roman City by sunset and spend your last night losing yourself in the maze of streets. Return to your accommodations at the end of the evening. 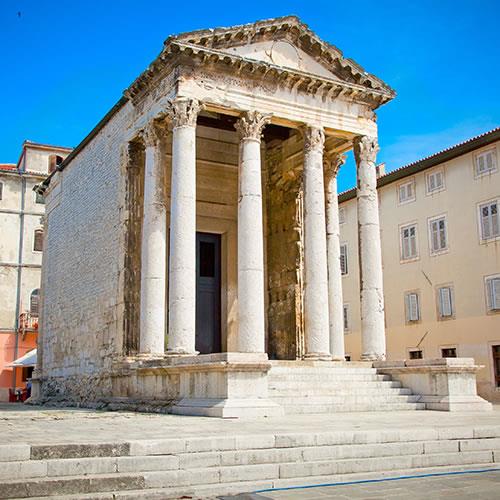 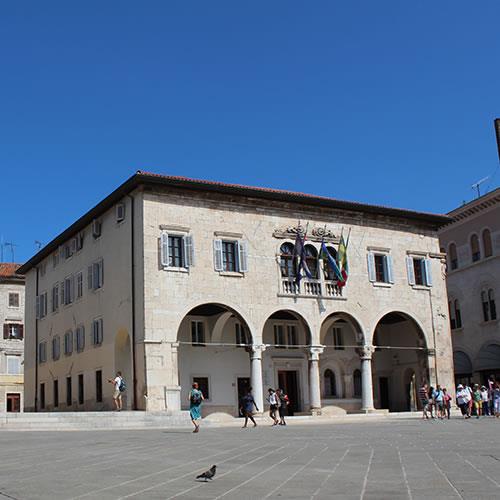 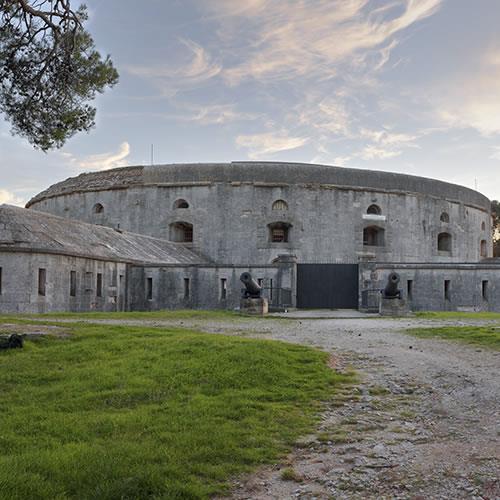 If you have some extra time in the area, consider spending time in one or more of the South Istrian Coast resort towns, all within a 10-mile radius of Pula. If you want a taste of traditional Istria while still being close to the beach, Liznjan (20 minutes by car from Pula) is the best place to go. Apartments are located in town, about 3/4 mile from Liznjan Beach, located on Kuje Cove. There are a few accommodation options close to the beach as well, and the beach has a cluster of bars and restaurants right on the water. Also consider Pješcana Uvala, on the other side of the inlet from Verudela peninsula. The town is a resort destination centered around Veruda Marina, the largest and most high-tech marina on the southern Istrian coast. Another popular beach destination within a stone`s throw of Pula is Štinjan, three miles northwest of town on Punta Christo Peninsula. 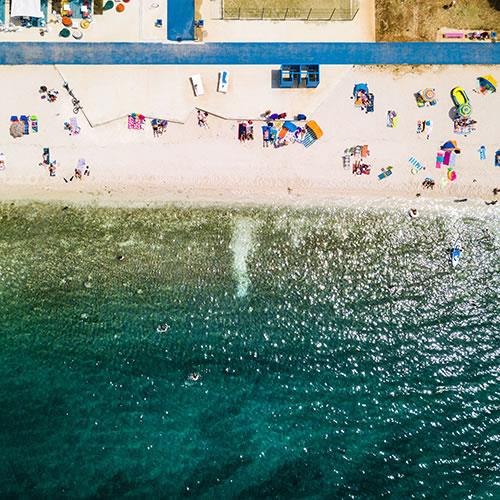 Your Last Day in Pula

Depart your hotel and head to the airport for your return home. If self-driving, please return your rental car to the place noted on your reservation (usually the airport, but double-check to make sure). If you are purchasing a private transfer, a representative will meet you at the hotel in time to take you to the airport for your flight out. We hope you enjoyed the sights of Pula! 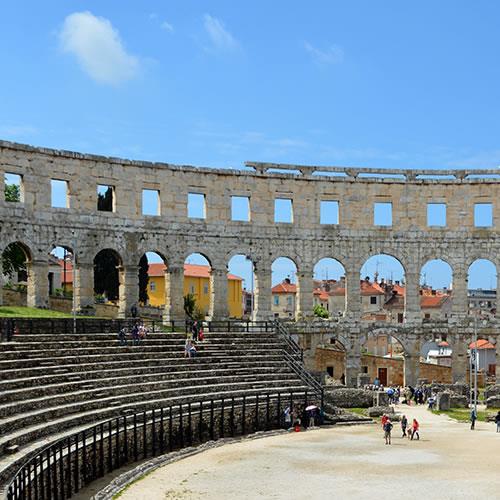