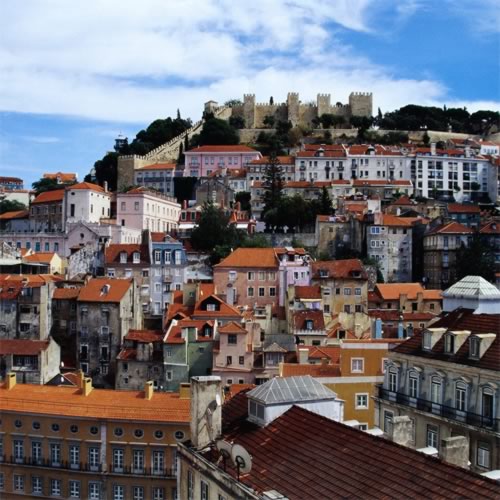 Perched on a hill, east of Praça do Comércio lies the Alfama, the oldest and most famous district of Lisbon. Saved only in part from the devastation of the 1755 earthquake, the Alfama was the Moorish section of the capital. In sharp contrast to the wide boulevards and logical, grid-based street plan of the adjacent Baixa district, the Alfama consists of a labyrinth of narrow, wandering streets that zigzag around a hillside, atop which the Castelo de São Jorge, a Visigothic fortification that was later used by the Romans, presides over the lower city. The Sé de Lisboa (Sé Cathedral) lies at the south end, down the hill from the Castelo towards the Tagus River. You could easily spend the better part of a day in the Alfama, visiting these sites and getting yourself lost among the vistas. Although recently notorious for pick pocketing, Lisbon's Tram 28 is still immensely popular with visitors as an alternative to wearing holes into their shoes. The tram rambles up and down between the Alfama district and lower Lisbon throughout the day. 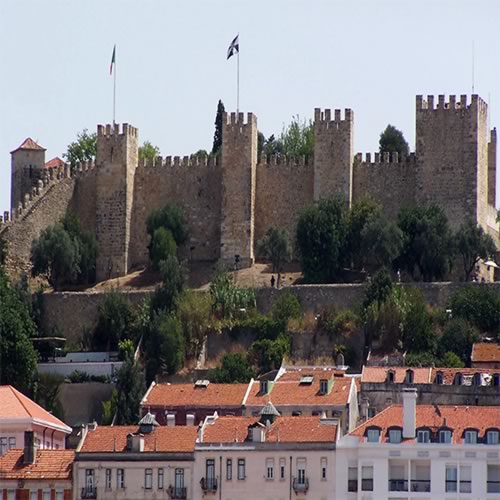 Out of the seven hills modern-day Lisbon is built on, Graça is the highest. The first peoples settled Graça Hill in the eighth century BCE, and the centerpiece of the entire neighborhood, the Castelo de São Jorge, dates from 48 BCE, when Lisbon was a settlement in the Roman province of Lusitania. Then, Lisbon was known as Olisipo, and it was estimated that about 30,000 people lived in the city at the time, which would have grown around and outward from the castle. The winding roads in and around the castle offer beautiful views of the city below, and the neighborhood has perhaps some of the most historic ambience you will find in Lisbon. Accommodation options can be found on all sides of the castle, all the way north and east to the Convento da Graça. 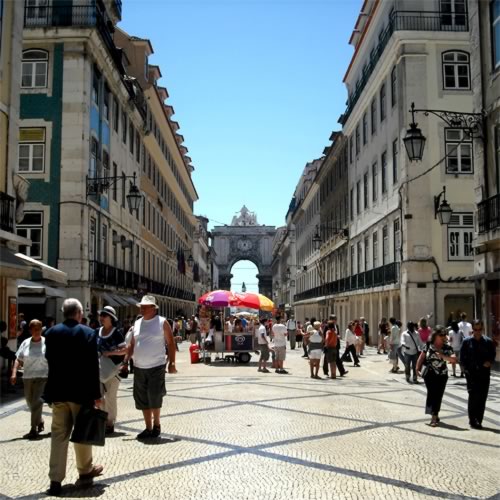 Destroyed by the 1755 earthquake, The Baixa was rebuilt, under Marquês de Pombal, with an elegance and architectural style all of its own. Running south, the main street of Baixa separates Praça do Comércio from the Rossio. A triumphal arch leads from the square to Baixa`s pedestrian-only Rua Augusta, one of the city`s most popular streets for shopping. Other streets in Baixa are named after the crafts that were once practiced there: Rua dos Sapateiros (shoemakers), Rua da Prata (silversmiths), Rua do Oro (goldsmiths), and more. The Baixa is really for wandering, shopping and people watching.

Adjoining Baixa to the southwest, the Chiado is even better known for shopping, with stores ranging from leather and crafts to fashion boutiques. It`s very smart and very chic, and full of Lisbon charm. The shops here range from the big chain stores to little boutiques, with a liberal sprinkling of book stores and others. You can wander up the gently sloping Rua Garrett, stopping for a coffee on the way.

The Elevador de Santa Justa from the Baixa up to the Rua Do Carmo, offers some of the best views in the city, and you can also visit the Carmo Museum, one of the best museums in the city, housed in the ruins of a convent, unrestored, roofless, and with Roman and renaissance statuary scattered around its walls, it is a strangely charming place. Together, the Rossio, Baixa and Chiado neighborhoods form the center of Lisbon`s tourist districts, sandwiched between Bairro Alto to the west, Alfama to the east and the Rio Tejo to the south. They are full of cafés and shops, as well as train/tram stations that connect visitors to top daytrip options, such as Belém, Sintra, Cascais and Estoril. 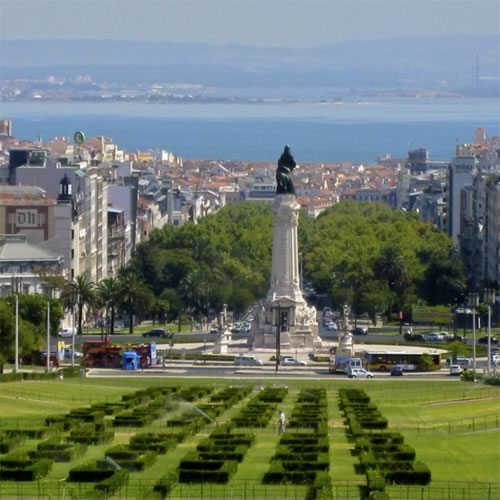 The Avenida da Liberdade is a wide boulevard connecting downtown Lisbon with the northern districts, linking Restauradores Square with Marquis of Pombal Square. It is a 300 foot wide boulevard, with ten lanes divided by pedestrian pavements decorated with gardens. The street, lined with trees and fountains, is decorated with statues and a large monument dedicated to WWI soldiers. Soon after its creation in the 19th century, the Avenida da Liberdada became a prestigious address, and grand buildings were erected along the street. Its scenic qualities, hotels, shops, theatres and architecture turn it into an important tourist attraction of the city. Famous nationally for hosting numerous luxury brands like Christian Dior, Chanel, Versace, Balmain, Gucci, Givenchy, Yves Saint Laurent, Michael Kors, Stella McCartney, Christian Louboutin, Donna Karan and others. It is nowadays considered as the 35th most expensive avenue in the world.

At the north end of the Avenida de Liberdade is a large traffic junction known as the Praça Marquês de Pombal. At its center stands a tall column with a statue of the Marquis of Pombal. The marquis himself led the city's rebuilding efforts, and he decided to raze the downtown buildings in the Baixa district, most of which had been reduced to rubble. Within thirty days after the earthquake the marquis had made plans for a new modern district with a network of parallel streets leading to a monumental square, the Praça do Comércio. The architecture used during the reconstruction, with anti-seismic features, is known as the Pombaline style. 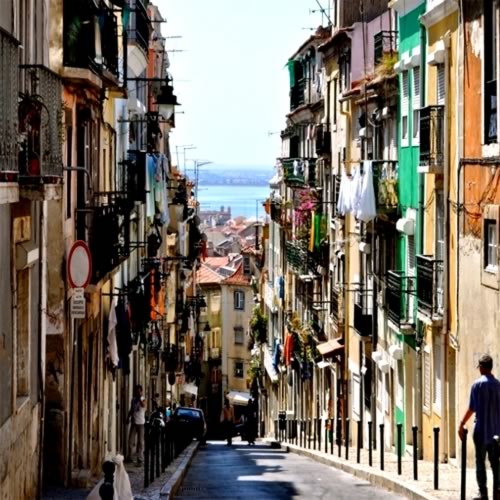 Coming out the Chiado, up the hill still further, you reach the Bairro Alto. Trams and funiculars can take you there, but most Lisboans use their feet. This section of town survived the devastating earthquake in 1755. The Bairro is a very old residential area, with tiny cobbled streets laid out in a grid. It is full of cool shops selling clothes, shoes, bags, particularly by young or new designers, which generally open late, and stay open late. The Bairro also has many small restaurants, ranging from the pricey to local holes in the wall. It's a great area to wander around looking for somewhere to eat. Somehow the Bairro also manages to pack in dozens of tiny bars and clubs, including fado bars. Because they are so small, most of the drinking goes on in the street. It's fun, friendly and not rowdy at all. Just look for the biggest concentration of people after midnight, buy a caipirinha and settle in to watch the passing parade. The Bairro does get noisy at night, and so may not be the best place to sleep, but it's very safe and exciting. 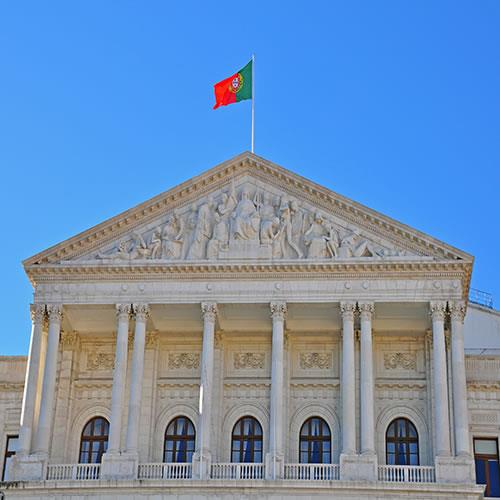 Príncipe Real has a very charming character. It is close to the Avenida da Liberdade and the Rossio, and at the same time far enough away from the action to appeal to those who want to savor the city one neighborhood at a time. What a great place to start in Príncipe Real -- it is very upscale and well-known for its large mansions, built during the nineteenth century. The Moorish-inspired Embaixada Palace is a popular place to shop if you want locally-made items from handicrafts to furniture. Below the Embaixada, down to Rua da Palmeira, is one of Lisbon`s LGBT quarters. Nearby, you will find the University of Lisbon and its botanical garden, and near the Largo do Rato there is Shaare Tikvah Synagogue, built from 1902-04, the first synagogue to open its doors in the city since the expulsion of the Jews from Portugal in 1497. 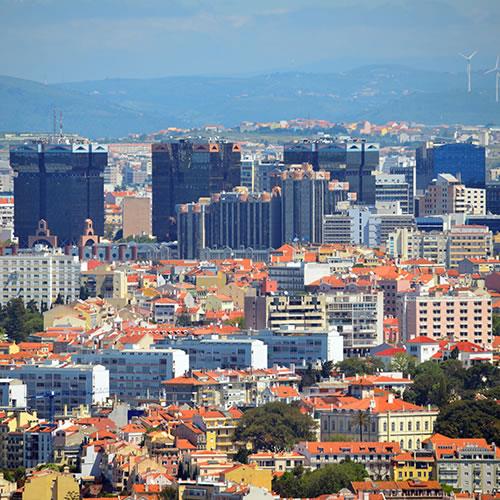 This neighborhood fans out from the south and west of Praça do Marquês de Pombal. Amoreiras, an area of Estrela, sits closest to the Praça, and Estrela proper is to the south, blending into the area of Santo António the further south and west you travel, especially past the Largo do Rato. Amoreiras is well-known for shopping and has two popular shopping malls. Amoreiras and Estrela are also known for their thriving art scene, and you will find many art galleries and museums here, such as the Movimento Arte Contemporânea (MAC) and Espaço AZ. The Reservatório da Mãe d'Água, an 18th-century reservoir which brought water to the neighborhood via the Águas Livres Aqueduct, is now open to the public as a museum. A museum dedicated to one of Portugal`s most celebrated poets, João de Deus, is located at the edge of the Jardim da Estrela. Santo António, a residential area, can be found west of the Jardim da Estrela. 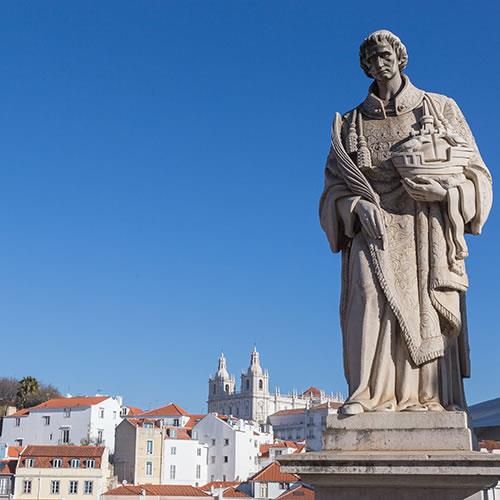 The São Vicente neighborhood is the easternmost neighborhood in central Lisbon, and is home to three major points of interest: Santa Apolonia railway station, which is a major hub for rail service to the rest of the country; the Panteão Nacional, also called the Igreja de Santa Engrácia, where such Portuguese luminaries as former presidents, writers, poets, singers, and even the footballer Eusébio (1942-2014) are interred; and the Monastery of São Vicente de Fora, the final resting place of the Braganza royalty of Portugal, and perhaps the most important Mannerist building in the country. The Panteão Nacional, started in the seventeenth century, was only completed at the behest of Antonio de Oliviera Salazar, the military leader of the `Estado Novo`, in 1966. The Monastery of São Vicente de Fora (named for the patron saint of Lisbon) took five centuries to complete (1147-1629). Many accommodation options are located within walking distance of Santa Apolonia station. 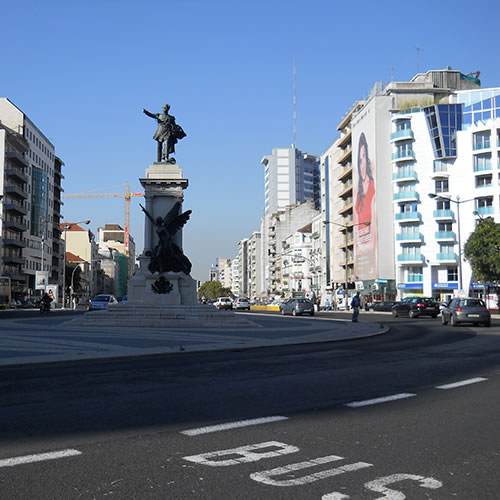 Further north from Marques de Pombal, and moving out of the center of Lisbon, the area between São Sebastião and Saldanha is more business-oriented, but also a good cheaper option for accommodation. The Metro makes it easy to get into the city, and is cheap, reliable and easy to use. You will find the higher-priced options to the west of Parque Eduardo VII, while the budget-friendly options tend to be to the east. The park is named after King Edward VII of England, who visited Lisbon in 1902 to help bridge relations between the two countries. The Carlos Lopes Pavilion on the grounds of the park was Portugal`s pavilion at the 1922 Rio de Janeiro International Exposition; it was deconstructed and rebuilt in the park in 1932.