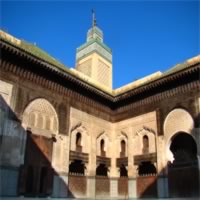 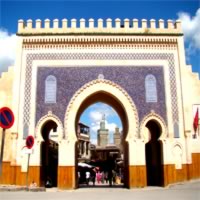 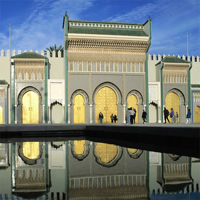 Fez is most famous for its ancient walled city, often compared to the walled city of Jerusalem. The whole old city of Fez has been declared a UNESCO World Heritage site. The immense medina of Fes-l-Bali (the old city) is a huge labyrinth. Lose yourself in the hustle and bustle of the various markets, and find your way out once you have had enough of all the sights, sounds, and smells that will overwhelm your senses. You should at least try to find the Medersa Attarine, the Medersa Cherratine and Medersa Seffarine, three stunning old buildings near the center of the maze. The other thing you shouldn`t miss is the people at work in the median: coppersmith, tanners, and dyers. The view from the hills surrounding the old city is breathtaking - there are two fortresses overlooking the old city and the Borj Nord which contains an armaments museum. 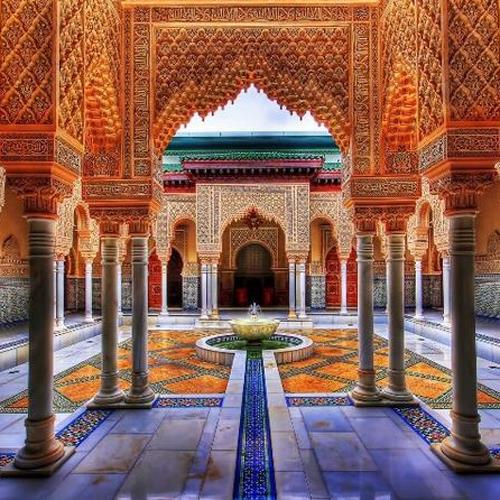 Discover three dazzling Moroccan cities and a UNESCO World Heritage Site in this customizable package!. Start this once in a lifetime adventure in Casablanca (a vibrant metropolis with the awe-inspiring Hassan II Mosque; the Old Medina and the Shrine of Sidi Abderrahman); and then, with a private driver, you will be escorted to the UNESCO designated Roman ruins at Volubilis; before arriving in Fez (known for its walled medina, with medieval Marinid architecture, vibrant souks, old-world atmosphere and its leather tannery). Finally, a driver will take you to your last destination, in Marrakech (one of the famed imperial cities in Morocco, and center of mosques, palaces and gardens). This is a flexible package. Select your number of nights in each city, desired hotel and activities.

Exciting mix of culture and history you will find in these Morocco's Imperial cities. Start in Marrakech (with its walled Medina and the worldwide open market: "Jemaa el-Fnaa"); after that, a transfer will take you to the oldest of the Imperial cities in Morocco (Meknes, Marrakech, and Rabat are the others); Fez (known for its Fes El Bali Walled medina, with medieval Marinid architecture, vibrant souks, old-world atmosphere and its leather tannery). From there, your next destination is Rabat (Morocco's capital and seat of the Royal Family with its palaces, mosques and parks). En route from Fez to Rabat, you will get the opportunity to visit the following stops: Meknes (known for its imperial past, with remnants including Bab Mansour, a huge gate with arches and mosaic tiling) and Volubilis (this ruined Roman city is the best-preserved archaeological site in Morocco). This is a flexible vacation package. Select your number of nights in each city, desired hotel and activities.

Close more details
See Morocco and get a true sense of its historic weight in this customizable package. Begin in Marrakech (one of the famed imperial cities in Morocco and center of mosques, palaces, and gardens); then, continue to Fez (known for its Fes El Bali Walled medina, vibrant souks, and old-world atmosphere). Finally visit Casablanca (a vibrant metropolis with the awe-inspiring Hassan II Mosque - one of the largest in the world and the largest in Morocco). En route from Fez to Casablanca you will enjoy a stop to marvel at the ancient Berber city and Roman settlement at Volubilis (a UNESCO World Heritage site). Connect these destinations with private transfers. This is a flexible vacation package. Select your number of nights in each city, desired hotel and activities.

Close more details
Combine beautiful and exotic Morocco with a journey to the heart of Spain. Begin in Marrakech (a treasure trove of historic and architectural sites, as well as some interesting museums); and then, a transfer will take you to Fez (known for its historic position in Moroccan dynasties and its old-world atmosphere). After that, you will visit stunning and cosmopolitan Casablanca with a stop at the UNESCO World Heritage site Volubilis along the way. Finally, catch a flight to the always popular Madrid (featuring the Golden Triangle of Art, famous for its nightlife and endless energy). This is a flexible vacation package. Select your number of nights in each city, desired hotel and activities.

Close more details
Egypt and Morocco are at your disposal with this customizable package! Start in Morocco, visiting Casablanca (a vibrant metropolis known for its Old Medina and the Shrine of Sidi Abderrahman). Next, en route to Fez visit the ancient Berber city and Roman settlement at the UNESCO designated Heritage site Volubilis. Your stay in Fez (known for walled medina, medieval Marinid architecture, vibrant souks, and old-world atmosphere) will undoubtedly impress you. Your last visit in Morocco will be Marrakech (one of the famed imperial cities of Morocco and home to any number of mosques, palaces, and gardens). After Morocco, take a flight to amazing Egypt to admire Cairo (a cradle of civilizations past and present) and Luxor (one of the most important destinations of the Southern Egypt, lying on the Nile Valley). This is a flexible vacation package. Select your number of nights in each city, desired hotel and activities.

Fez
Map of Point of Interest

Customize It
Explore the very best Morocco offers - from the Atlantic coast through the Atlas Mountains to the Sahara Desert with stays in these popular cities: Casablanca (with the Hassan Mosque); after that, visit these two coastal cities with beautiful beaches; Essaouira and Agadir. Continue to Marrakech (the imperial city center of mosques, palaces and gardens); next is Merzouga (in the Sahara Desert with huge expanse of sand dunes north of town); then, Fez (known for its walled medina, vibrant souks, and its leather tannery). Finally, visit Tangier (the gateway between Africa and Europe). You will enjoy private transfers between all cities that will allow you explore the following stops: El Jadida (port city); Taroundant (known for its local crafts); Paradise Valley (abundance of rock pools and small waterfalls); Boumaine Dades; Risssani and the "Blue Pearl of Morocco"; Chefchaouen (famous for its varied shades of blue paint that cover the walls and its Old Medina). This is a flexible vacation package. Select your number of nights in each city, desired hotel and activities.
Included:
Customize It

Browse all 11 customizable packages  or  Build Your Own Itinerary