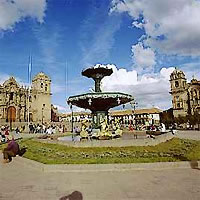 The historic center of Cuzco maintains the spatial organization and most buildings from the ancient Inca Empire capital and the Viceroyalty. Along its streets and squares, it shows its original urban and architectural characteristics. Despite the metropolitan growth, the sectors that make up the Inca imperial city are recognizable, including the ancient stone structures and their advanced building technique. Such structures define and enclose streets and canchas (housing units), on which colonial and republican houses, monasteries and churches rose and kept intact all their architectural components and works of art inside them. This group of attributes can be found unaltered within the determined area maintaining its structural, material and urban integrity. 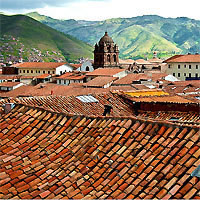 San Blas is Cuzco`s most atmospheric and picturesque neighborhood - a short, steep walk from Plaza de Armas. The Plaza is lined with artists` studios and artisans` workshops, and is teeming with tourist spots - many of the best bars and restaurants and plenty of hostels. San Blas is an ideal place to walk around with many of the streets being pedestrian only. The neighborhood also has some of the most wondrous panoramic views in the city. In the small plaza northeast of Cuesta San Blas is the small white Templo de San Blas, the oldest parish church in Cuzco.

Although the church is a plain adobe design it contains a remarkably carved churrigueresque (lavishly ornamented Spanish baroque) cedar pulpit. Some critics have proclaimed it as the best illustration of woodcarving in the world; carved from a single tree trunk, it is an absolutely impressive sight to see. The pulpit has an odd history and it`s difficult to tell whether it is fact or fiction: It is said that the carpenter who carved it was rewarded by having his skull placed within his masterwork at the top (beneath the feet of St. Paul) upon his death. Also worth a look is the baroque gold-leaf altar. Tourist attractions include San Blas Cathedral and the neighborhood of San Blas. 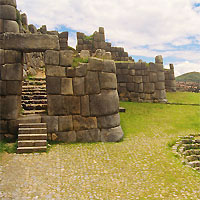 On the hills above the city of Cuzco, ancient neighborhoods sit. Santa Ana is thought to be the oldest of them and from the steps that are at the side of the old and significant church, the view of the Plaza de Armas is captivating and calming. Located under the important hill Picchu, this neighborhood was inhabited as much as 800 years before Christ. The famous archeologist John Rowe excavated the site called Chanapata which was found here; perhaps the earliest site of human habitation found to date in the Cuzco Valley.

Today the streets of the neighborhood are bustling with many people and there are always vendors of selling food and drinks. In the area between the arch and the Plaza of Santa Ana, you see a diversity of businesses such as travel agencies, restaurants, grocery stores, hostels, and many others. On its festive days, both tourists and local people fill the neighborhood with joy and emotion. The carguyoq (those responsible for sponsoring the feast) and their supporters present dances, allegories (floats) and fireworks. Other tourist attractions nearby are San Francisco Church and Plaza, Santa Clara, Arch of Santa Clara, Sacsayhuaman, and Cristo Blanco.